With gold and the stock market surging, today King World News is featuring a powerful interview with one of the greats in the business discussing what’s in store for gold and oil in 2016, and may will surprise investors.

James Turk:  “As we head toward the end of the year, Eric, there are two important points that I would like to make. The first relates to my KWN interview two weeks ago just after gold touched a multi-year low at $1,046…

James Turk continues:  “We were discussing how gold had developed into a 2-tier market as a result of the demand for physical gold overpowering the demand for futures and other paper promises. This two tiered market is evident from the huge premium on coins and small bars as well as the backwardation on 400-ounce LBMA bars, which continues to deepen (see chart below).

For example, as we can see on the above table of Comex gold future prices from Friday, the December contract closed $1.20 above gold priced for January delivery, which was only 17 days away. That’s about 2.5% per annum on a straightforward arbitrage, which is a good return in today’s low yield environment.

Turning back to our conversation two weeks ago, you will recall me saying that although they don’t ring a bell at market tops or market lows, we have to remain open to the “real possibility” that a bell did ring announcing the low in gold and silver. I was half right.

Silver last week made a new low, but gold held above its early December low, which has now created a bullish divergence. And today we are getting good upside followthrough on both precious metals, which is always an important technical indicator.

And another key indicator has turned positive. Gold and silver are breaking above their short-term moving averages. Trend reversals always begin with events like these.

So my first important point is that I would like to re-emphasize my comments from a couple of weeks ago. We have to be alert that the low in gold and silver may have already been made and their price trend is reversing.

This brings me to my second point – crude oil prices. The following chart presents the monthly price of crude oil in terms of gold, instead of looking at the price in terms of dollars. 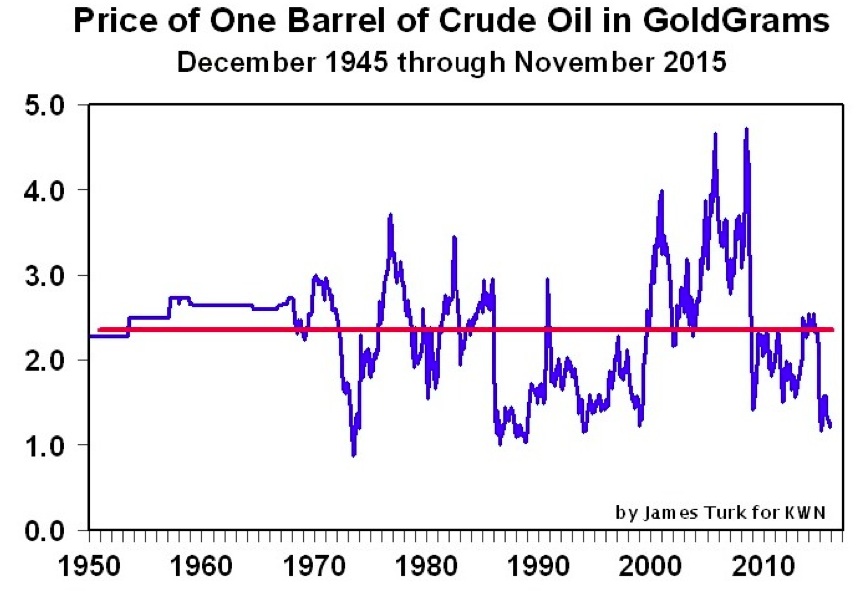 Right now it takes only about 1 gram of gold to purchase a barrel of West Texas Intermediate crude oil, which is even less than the 1.2 goldgram price at the end of November shown on the above chart. So crude oil – when its price is measured in terms of gold – is at the historic low reached in the early 1970s, and we all know how crude oil and gold thereafter soared higher for the rest of the 1970s.

My expectation is that the odds are high that history will repeat for one simple reason — government intervention in markets never ends well.

The Fed is no doubt very self satisfied that they pulled off the first rate hike in seven years and the stock market hasn’t collapsed. But the central planners at the Fed should not be patting themselves on the back, Eric. There are a lot of things spinning out of control because the damage done by central banks from their market interventions and destructive monetary policies is now coming undone. We need to consider the consequences.

Lower oil prices haven’t done much to help the economy. What is the impact going to be on a debt-laden economy when the oil price starts rising? Markets are never a one-way street.

I expect that the real impact is going to come from the national currencies that we use today as money. They have been losing purchasing power ever since the discipline of the gold standard was jettisoned in favor of central planning and strict government control of the market process. The ongoing loss of purchasing power of the dollar, euro, yen and all the others – which results from central bank control of the currency we use as money – is I expect going to accelerate in 2016.

What’s In Store For Gold And Oil In 2016!
So again, I want to go back to the same point about bells not being rung at market tops or bottoms. We have to again consider the real possibility that the low in crude oil is at hand, or very close. Given that gold is inching up from its multi-year low made in early December, I suspect that crude oil will soon be turning higher here too from its multi-year lows, which of course is bullish for gold.”  ***Michael Pento’s remarkable KWN audio interview has now been released and you can listen to it by CLICKING HERE OR ON THE IMAGE BELOW.

***ALSO JUST RELEASED:  This Is Why The Price Of Gold Is Surging Today CLICK HERE.