With the U.S. Dollar Index back above 99, today King World News is featuring a piece from one of the greats in the business discussing what to expect from major markets now that the Fed has changed its language.

"Just because we removed the word patient doesn't mean that we will become impatient." — Federal Reserve Chair Janet Yellen, 3/18/15

March 19 (King World News) – Not since last Fall's Ebola scare has a single word elicited so much media attention as the word "patient" did this week. It was the first topic discussed during my appearance Monday on Canada's BNN network, and I only saw perhaps a handful of guests on CNBC pass off camera without first being asked for an opinion on the matter.

In fact, the only other subject getting similar coverage at the moment is the upcoming NCAA basketball tournament, which, for reasons unknown, is still being held this year, even without my Florida Gators in it. And all of this "patient" talk, of course, was in reference to whether or not the Federal Open Market Committee's statement, which was mercifully released yesterday, would contain either the word itself or similar language to imply the Fed may delay raising its target rate until after its June meeting.

Funny enough, though, I can't seem to recall seeing anyone who thought they would leave "patient" in the statement, but after all of this rampant discussion, the fact that it was removed was largely overshadowed once the actual release came at 2:00 p.m. This was because the rest of the statement, as well as Janet Yellen's subsequent press conference, reflected the committee's belief that economic growth may be moderating and that there is continued slack in the labor markets. So this was yet another case of bad news being good news, for this language was enough to convince the market that the initial raise would come later rather than sooner, a belief that boosted stocks higher and knocked the 10-year US Treasury Rate back down under 2%.

It was a temporary win for the Bulls, but it only delayed the fight until a future date because higher rates are most likely coming at some point. The FOMC appears to be telling the truth when they say that their decision will be dependent on the data, so unless we get a meaningful economic slowdown, we seem to be progressing, step-by-step, toward a hike in rates sometime later this year.

Rising interest rates frighten a lot of people, hence all the coverage recently of the FOMC's meeting; and there are, of course, fundamental reasons behind the apprehension. For one, higher interest rates make business investment more expensive, raising costs and stifling growth. And the improved yields one can get in bonds make a position in relatively riskier stocks look less appealing. However, history shows us that spikes in the target Federal Funds rate are not necessarily the immediate market killers everyone expects them to be. 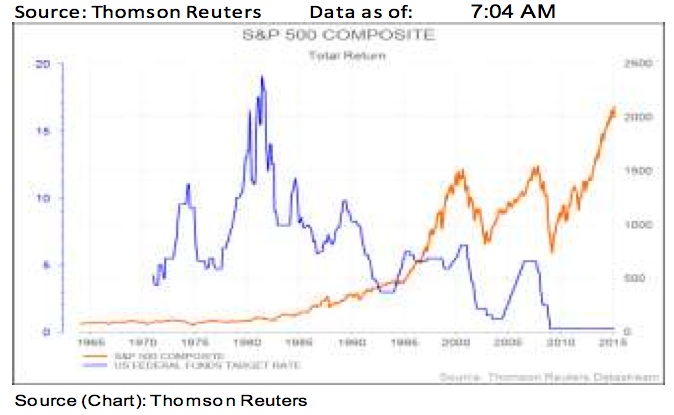 Take a look at the chart (above) and there are clear instances where the rate was hiked and yet the market continued to go up. This actually happened last time the target was raised back in mid-2004. The S&P 500 managed to extend its bull run an additional 40% over the next three years, so I wouldn't recommend switching out of stocks quite yet. Remember, too, the target is near 0%, so even when the Fed does begin raising, it still should be a while before we approach anything close to the historical averages. So now that "patient" is gone, be patient. ***ALSO JUST RELEASED: What To Expect After The Fed Rolls The Dice And What I'm Doing With My Own Money Right Now CLICK HERE.