On the heels of the Shanghai stock market plunging over 6%, the Godfather of newsletter writers, 91-year-old Richard Russell, declares gold bottomed as China shocked the world.  The legend also discussed the chaos in China as well as a trapped and increasingly desperate Federal Reserve. 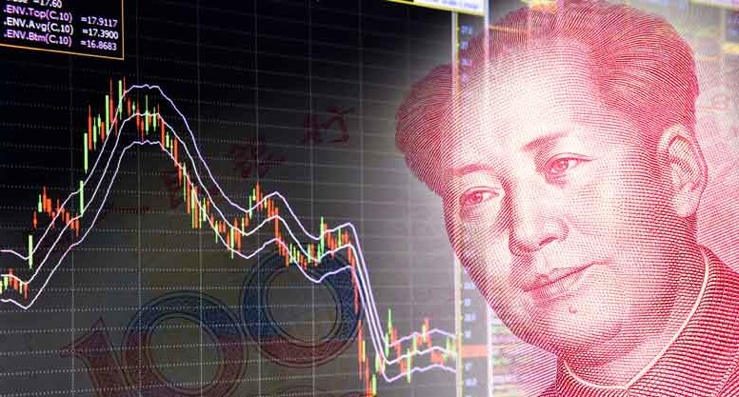 Richard Russell:  “China shocked the world’s markets last week by unexpectedly devaluing its currency, the yuan, for two consecutive days. The Chinese move pressured the yuan down nearly 4%, its biggest drop since 1994. This also increased fears that the world’s second largest economy is in worse shape than China has been letting on.

The Chinese devaluation of the yuan in my mind officially marks the beginning of the currency wars. Every nation desires a cheaper currency to aid it in its exports. The US dollar is already considered overpriced.  This places the Fed in a dilemma. If they raise short rates for the first time in six years, the dollar will become more overpriced than ever. Exports will be hurt. It also will be very interesting to see if the Fed has the courage to raise rates this year or next. If the Fed does raise rates, my guess is that the boost will be something like 1/10th of one percent. The Fed, by literally announcing a rate raise, has placed itself in an incredible box.

Gold, The Sworn Enemy Of The Federal Reserve

Gold is a sworn enemy of the Federal Reserve. Unlike with fiat paper money, the Fed cannot produce more gold with the tap of a computer. Nor can the Fed reduce the supply of gold when it wants to. To my mind, the greatest negative of gold is that it cannot provide the most powerful bullish force in the market, which is compounding. Since gold produces no dividends, holding gold does not allow for compounding. However, gold shines during a booming bear market. Unlike a stock like General Electric, gold cannot drop to zero, even in a major bear market. An ounce of gold, regardless of inflation or deflation, always has value. Silver and gold constitute pure wealth.

Is it possible that Dennis Gartman is becoming bullish on gold? Dennis is now officially neutral on dollar denominated gold. According to Dennis, “The ‘commercials,’ who are usually quite heavily net short of futures as they hedge their inventories of gold, are holding their smallest net short position in modern memory.”

Dennis shows a weekly chart of gold, and states that, “a small, but reasonably important, downward sloping trendline shall be broken through to the upside if gold were to begin trading to and through $1120-1122 today. However, the real battle between the bullish and bearish forces does not take place until spot gold makes it way upward toward 1150-1160.  That shall be some while yet into the future.”

Russell Says Gold’s Worst Days Are Already Behind It

Russell opinion – gold has bottomed, and its worst days are behind it.” I would urge all KWN readers around the world to subscribe to Richard Russell’s 90 years of wisdom and remarkable writings at Dow Theory Letters by CLICKING HERE TO SUBSCRIBE.

***KWN has now released the extraordinary audio interview with Michael Pento, where he discusses why the fantasy is now coming unraveled, what this will mean for the gold and silver markets and much more, and you can listen to it by CLICKING HERE OR ON THE IMAGE BELOW.