Today Michael Oliver, the man who is well known for his deadly accurate forecasts on stocks, bonds, and major markets, gave King World News an important update on the gold market explaining that what is really unfolding is fascinating.

Gold
June 7 (King World News) – Michael Oliver:  MSA continues to monitor gold and related on long-term metrics and continues to see naught in terms of downside breakage or even pending downside breakage. And yet almost every firm on Wall Street and most gold-related letters have at some point in the past year cried “top” with much emotion.

“Trading tops” occur continually in any uptrend. It’s called breathing! Look at the price and momentum advance from 2009 to 2011. 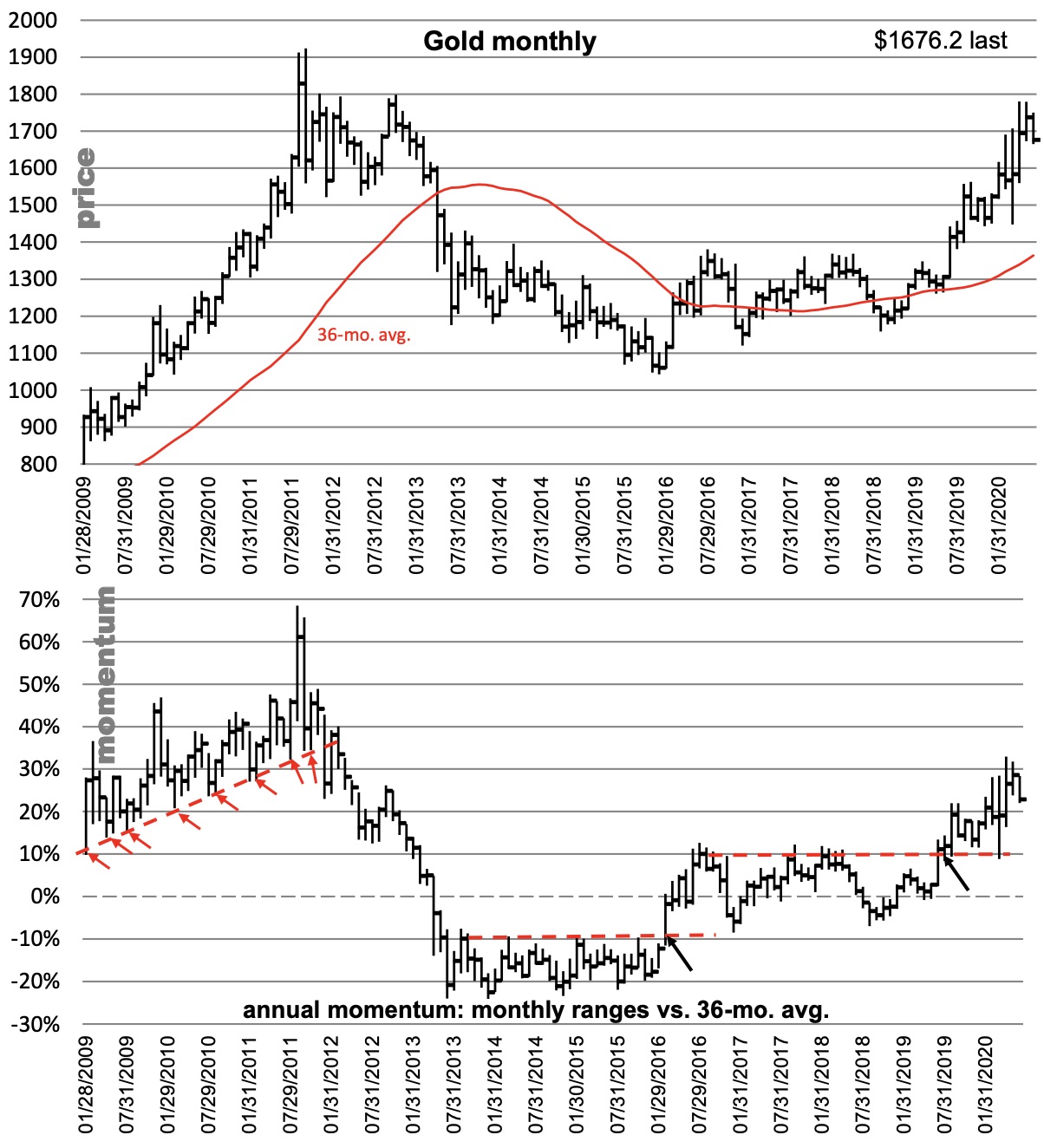 The arrows note many severe drops that amounted to noise. And in that process they developed structure that would later be important. Same with the downtrend in gold. We recall several $150 and $200 rallies that meant nothing.

Structure is what is needed, and then its breakage. Right now the uptrend has simply not developed any structure to break— nothing even remotely nearby.

Look at the action on momentum as the market put in its top in 2011. Below the market was a five- to six-point gradual uptrend. Bleeding obvious on momentum, and MSA was watching it…

Now we look at annual momentum and there’s nothing nearby to indicate downside or something that sustains. Yet we continually hear cries that “It’s over!” Maybe we’re dumb and maybe we’re wrong, but based on our momentum trend structure methodology, this is a fairly new uptrend on annual momentum and one that does not show anything that says a downtrend is about to begin due to major structural breakage. So we turn to something more intermediate trend to assess the recent action. Next page.

Okay, so we drop down to the level that so many investors are looking at: the day to day.

Daily prices vs. the 3-day avg. Short-term trend. What do we see?

The Reality
“Since the mid-April surge high, there’s been much turbulence, up and down. For daily price it’s been a swinging range with a midpoint of around $1720. Above and below, above and below. Bulls win, bears win. Nobody wins. That’s the reality. 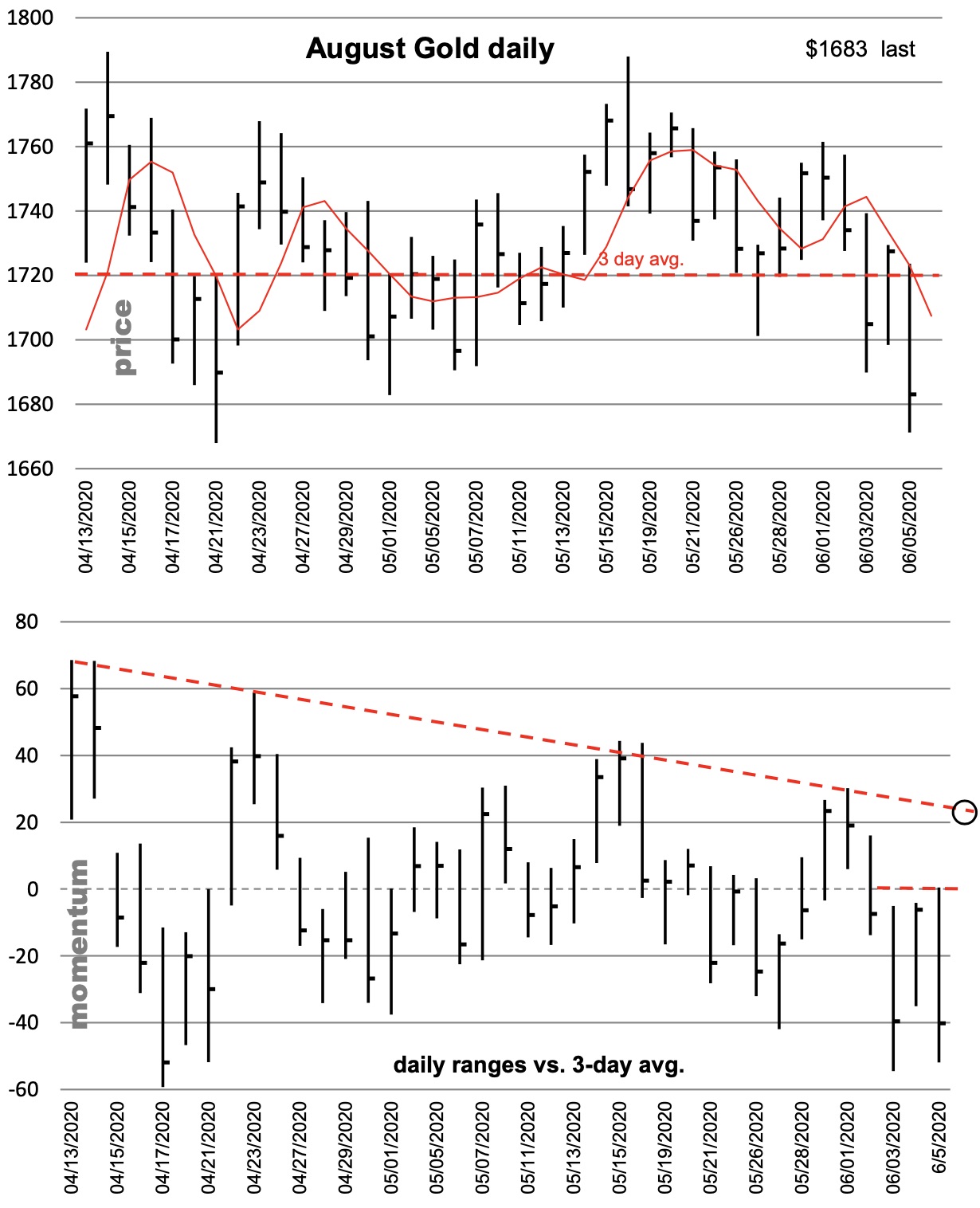 Meanwhile, for daily momentum it’s been a process of constantly declining highs. And you’d think given that the bears might have gained much ground. Well, yes, the price is back at the lower end of the range, but it’s taken multiple downside bashes over much time to achieve that. If I were a bear, I’d be concerned about the lack of potency, and thus vulnerability of my short position.

The first level to watch for now is the ability to get back over the zero line/3-day avg. and take out the past three days of dancing below there. For Monday if August gold trades over $1707.50, that level will come out. And that number adjusts down sharply each day. Tuesday it’s likely that getting over $1698 will do it. Consider that a first sign of upturn.

But the big trendline is around $20 or more over that falling 3-day avg. For Monday a close at $1729 or higher will break out over that structure. Looking out to Wednesday for example, that line will be taken out if August gold closes (estimated) at $1708. MSA will update, but for now we have a situation in which selling pressures have dominated (hence the declining momentum trend line) for nearly two months. And what have the bears got to show for it? Ponder that…This was only a small portion of the entire report this weekend. To subscribe to Michael Oliver’s MSA annual click here.