Ahead of the Fed decision on interest rates, Jeffrey Saut’s partner Andrew Adams, is bullish on silver.

Here is a portion of what Jeff Saut’s partner Andrew Adams wrote today: Monday I received a great suggestion from a loyal emailer that said, “With so much of the stock market trading at or near all-time highs, it may be worth exploring some alternative investment ideas as we enter 2017.” Not only did I believe that to be a good idea, but funny enough, it sounds an awful lot like the subject of that very first edition of “Charts of the Week,” which featured some “contrarian” picks for 2016 that I thought could experience a big rebound at some point this year. At that time, though, basically anyone who was optimistic and bullish about stocks was considered the contrarian, so it made it pretty easy to go against the grain and defy public opinion just by not predicting the end of the world…

Now, it gets a little tougher because overall market sentiment has improved a bit, especially after the election, yet we still feel this is a stock market that wants to go higher. So, while I have tried to find some individual stocks that have not been participating in the recent rally and may be due for a turn-around, I also took a look at global and commodities markets to see if there could be some opportunities that may not be getting the attention they deserve.

As I wrote in that first piece last year, “Being contrarian just for the sake of being contrarian is probably not a winning strategy in the long run, but when sentiment swings too far in any one direction, it can often be extremely profitable to begin looking the other way.” That still rings true, so without further ado, here are some “out of favor” ideas for the coming year.

King World News note: There were many contrarian ideas, but we chose to highlight what Saut said about silver, which is below, including a chart.

Saut Bullish On Gold’s Cousin – Silver ($16.98)
If you recall, last year a big part of my “contrarian” focus was on commodities, which as a whole looked like they were putting in a multi-year bottom. And, sure enough, we did see many of the more popular commodities like oil, gold, and natural gas trade significantly higher at some point in 2016. Silver certainly benefitted from that, too, but it hasn’t received the attention of its more popular cousin, gold, which it largely outperformed for much of the year (lower indicator is the relative strength between the two metals; silver is outperforming when the line rises). Now, after pulling back almost 24%, silver may make for an interesting investment once more. It hit support around $16, and pulled back to the former resistance line from the last few years that now acts as support. Commodities are going to continue to be volatile, especially if the U.S. dollar strengthens further, but there may be some technical hope for silver at the moment (see chart below). 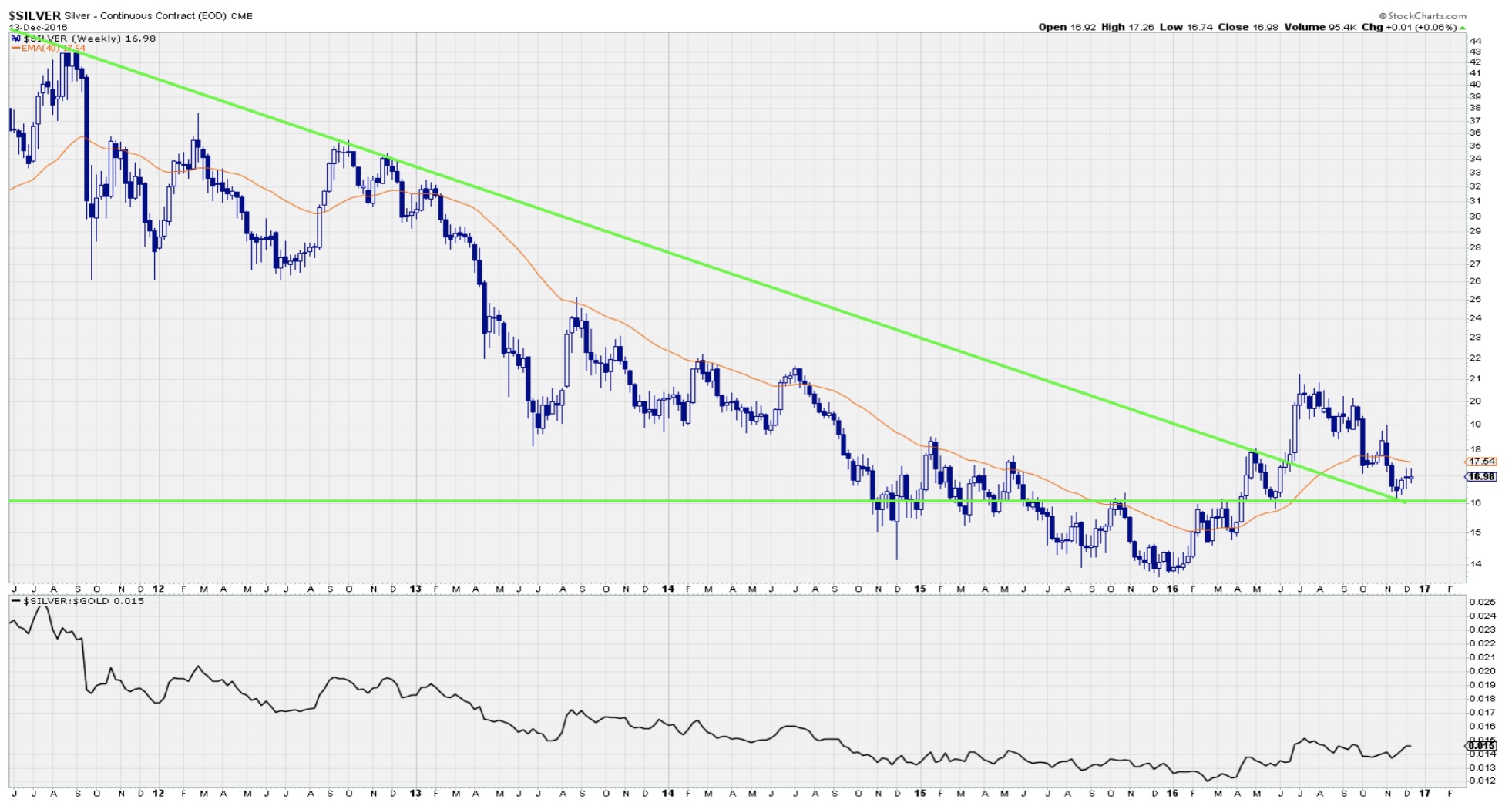 Also, here is a portion of today’s note from Art Cashin:  Trump And Yellen – During the campaign, Mr. Trump was critical of Chair Yellen and the Fed, accusing them of being politically motivated by not hiking rates before the election. That has prompted much speculation about whether he would try to move to push for her resignation. (Her term as chair is scheduled to continue into early 2018.)

Away from Yellen, there are already two vacant Fed Governor seats. In addition, if Trump put one of his appointees in charge of regulatory enforcement, many feel Gov. Tarullo might resign, creating one more vacancy.

But, as President, would Mr. Trump want a more hawkish Fed? We think his economic advisors would likely counsel otherwise.

We may get a clue this afternoon. The Fed will hike 25bp. Yellen will likely take a future wait and see policy. Will Trump tweet hostilely, saying they hiked rates now that I’m in?

So, if there’s a tweet, its tone may be just as important as the rate hike and maybe even more so. Some Bond Cautions – Here’s a bit from Bloomberg:

Jeffrey Gundlach, chief investment officer of DoubleLine Capital, called President-elect Donald Trump’s policies unfriendly for bonds, and predicted that yields on 10-year Treasuries may climb to 3 percent next year. BlackRock Inc. is also predicting rising bond yields in 2017, as global growth spurs inflation and investors become “more constructive on the global macro economy.” A Treasury Department research unit has issued a warning about corporate debt, as the ratio of company debt to gross domestic product surpasses 2007 levels, and said the biggest buyers, including mutual funds, pension funds and life insurers, should be stress-tested to prevent instability in the event of a market downturn.

Overnight And Overseas – Asia was a bit of a mixed bag. Tokyo and Hong Kong rose marginally while Shanghai and India dipped but Australia had a nice rally.

In Europe, most equity markets are seeing mild losses as Italian banks give back a bit of yesterday’s sharp rally.

U.S. bond yields are a bit lower as the BOJ acts to cap yields on JGBs. Crude is down mostly on huge API inventory build, and rumors of Mid-East cheating on recent quota. Gold is flat and the dollar is a touch softer.

Consensus – They want 20,000 so badly they can taste it but Fed watch and soft crude may be counterweights.

***ALSO JUST RELEASED: Is The World About To Hurtle Into Another Period Of Massive Financial Instability? CLICK HERE.