Jeff Gundlach says stay long gold and he also discussed why stocks are headed much lower.  There is a note included from top Citi analyst Tom Fitzpatrick.

Here is a portion from Art Cashin’s note today:  Gundlach On The Markets – Jeff Gundlach of DoubleLine Capital caused some ripples with a webcast he did yesterday. Here are some highlights from a Bloomberg piece on the webcast:

The Standard & Poor’s 500 Index has about 2 percent upside and 20 percent downside, making for a lousy risk-reward trade-off, according to money manager Jeffrey Gundlach.

Betting on stocks is a “big losing proposition,” Gundlach said Tuesday during a webcast. The recent rebound is a “bear market rally,” he said.

In other pronouncements, Gundlach said:

* Even with the high likelihood of domestic stock markets facing losses, the chances of a U.S. recession in the near term are low.

* Oil inventories are still “through the roof” and demand is too weak to fuel a recovery in energy markets. Bankruptcies are likely to increase in the sector, with more corporate debt facing downgrades, a trend that is also hurting banks. When the defaults come, “recovery rates are going to be highly disappointing” because borrowers are so heavily levered, he said.

* Negative interest rates in Europe and Japan have had the opposite of the anticipated effect on currencies, with both the euro and Yen gaining against the dollar since central bankers moved rates to below zero. They’ve also strengthened non-dollar-denominated bonds. “You’re better off in G7 bonds than U.S. dollar bonds,” he said.

* The Federal Reserve will probably avoid a new round of quantitative easing and negative interest rates. In the U.S., he said, negative rates would “backfire like an old Model T.”

Overnight And Overseas – Asian markets were mostly lower but traders felt much of that was catch-up to the selloff in the U.S. yesterday. Asian bond trading seemed particularly volatile.

In Europe, stocks are higher as crude has reversed to the upside. The base metals are mostly higher despite a plunge in iron ore.

Consensus – Crude and Europe back on the upside, putting a bid under U.S. equity futures. The DOE inventory data at 10:30 will be watched carefully. Draghi will have a tough time living up to current expectations. Stay wary, alert and very, very nimble.

Top Citi analyst Tom Fitapatrick sent KWN this note on commodties:  The Continuous Commodity Index (CCI) rallied through the top of the channel and has a reverse head and shoulders pattern that targets 395 (see chart below). 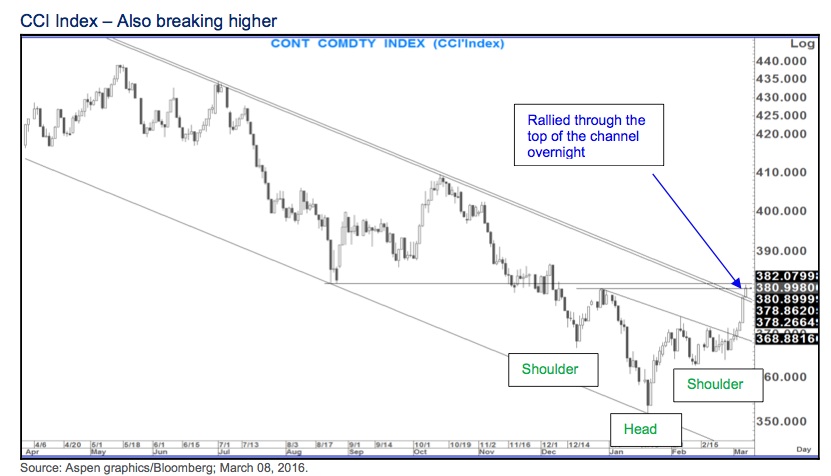 Overall the chart above is pointing towards a positive market outlook (for commodities).

King World News note: Strength in commodities will be very bullish for both gold and silver in the medium-term.