As we kick off the final week of trading in October, today James Turk told King World News silver will skyrocket from its huge multi-decade base and “mammoth cup & handle.”

James Turk:  “It looks like the central banks have everything pretty well buttoned down, Eric. Many markets are stuck within narrow trading ranges…

This tight control over markets is what central banks have been aiming for with the US election only a couple of weeks away. While they can force their ongoing influence on markets through their interventions, central banks cannot control markets forever.

We need to keep in mind that in the end, markets are always bigger than any central bank or even a group of central banks acting together. We saw that principle play out in 2008 when various markets unravelled for months leading to the Lehman collapse and subsequent upheaval. So I expect the action starts after the election, regardless who wins, and I expect the big winner to be the precious metals.

I’d like to take another look at my long-term silver chart. You will recall the last time we discussed it was in July. Back then silver had just broken above its long-term downtrend line, which was the best news for silver in five years. 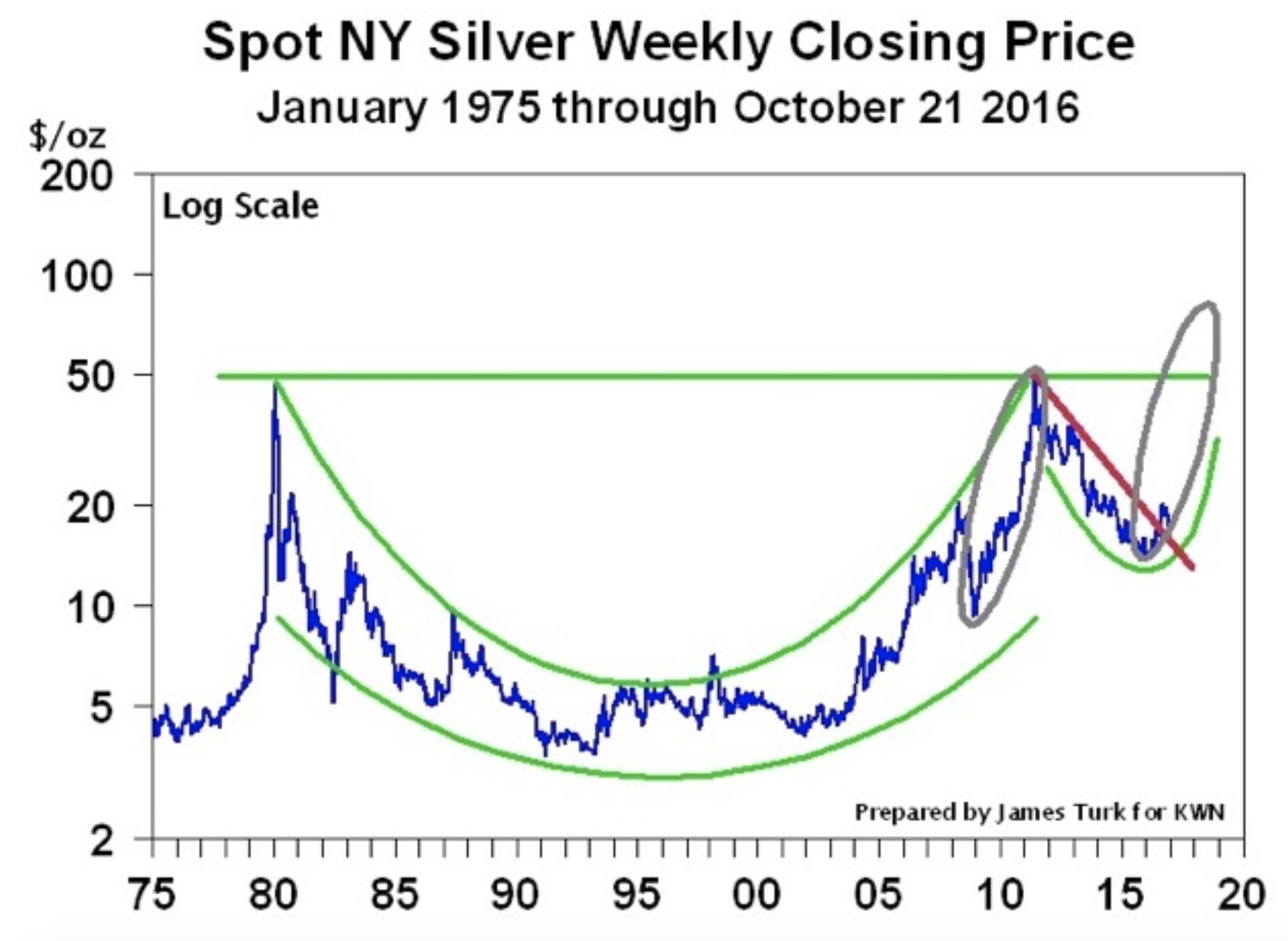 I again show on the chart above the same two oval patterns I included in July to mark what I believe is silver’s potential. The first oval shows how silver soared from the high teens in the summer of 2010 to nearly reach in April 2011 it’s all-time high of $50, which goes all the way back to silver’s blow-off peak in January 1980.

The second oval, which is an identical size to the first, maps out silver’s potential. Sometimes history does repeat.

Since July, silver has backed-off from the $20 area it reached back then. The hype surrounding silver has also declined a lot over the past three months, but importantly, there has been no deterioration in silver’s chart pattern. Only sentiment has changed, which explains why charts are so useful. Charts provide an objective and unemotional overview. And what this chart is showing us is that silver has simply put in a mild correction of around 12%. It has retraced back towards support, but remains within the oval pattern.

Silver’s Huge Multi-Decade Base & Mammoth “Cup & Handle”
So in my view, nothing of substance has changed. Silver is still building this huge multi-decade base that is expressing itself as a mammoth “cup & handle” chart pattern. To break out of this huge base, silver has to hurdle $50. When that happens silver will simply be catching up with nearly every other commodity on the planet that has already exceeded their 1980 price.

Finally, Eric, we are now in month-end option expiry week for the precious metals. Typically there are not many calls written for November expiry, so the incentive of central banks and their agents to manipulate the price power is less than it is in other months.

Nevertheless, the typical pattern is setting up. There was a small spike higher today in gold and silver that triggered buy stops, which were stuffed with short selling. So if this typical pattern holds, look for the shorts to cover Wednesday and Thursday, which is when the low price for the week will likely be reached.

The lows this week will be another good buying opportunity because I expect the precious metals to head higher after the election and as we move toward the end of the year.”

***ALSO RELEASED:  Paul Volcker Surfaces And What The Elites Are Foisting On An Unsuspecting Public CLICK HERE.

Here Is More Fuel To Turbocharge The Gold Bull Market