Today a 40-year market veteran sent King World News an incredibly important piece that addresses the chilling question: Is the world being set up for something even more terrifying than the global stock market crash of 1987?  This piece exclusively for KWN also cautions the endgame this time will be more disastrous.

April 19 (King World News) – The Crash of 1987 was an unforgettable experience. The financial system experienced a cardiac arrest of epic proportions….

By early August the Dow Jones Industrials had risen by 44% since the start of that year. Academics had convinced Wall Street fund managers that “portfolio insurance” would allow them to take larger percentage positions in equities than what was traditionally utilized in the past. If the markets turned, they were told they could hedge allocations by selling futures contracts in Chicago.

Like today, there were geopolitical events rattling the financial markets. It is hard to believe, but the Iranians were as actively involved as they are today. On October 15th and then again the following morning, Iran fired Silkworm missiles that hit two ships, one an American supertanker and a smaller Kuwaiti oil transport ship.

Further complicating trading on Friday the 16th, an unusual cyclone hit England and France with devastating effects. Many people were killed along with significant physical damage and loss of power. All markets in London were closed that day.

Friday was a harbinger of what was to come with the Dow Jones Industrial Average falling almost 5% on record volume, adding to declines on Wednesday and Thursday of 4% and 2.5%, respectively.

From that point forward, it was all downhill. The root cause of the 1987 Crash had to do with derivatives. The “insurance” that would protect portfolios turned out to be illusory. When the managers went to hedge with the futures contracts, the expected bids were not there. Realizing that it was a trap, the only course left was to liquidate the individual positions on traditional markets such as the NYSE.

Monday was breathtaking, mind-numbing and stupefying. The selling began in Hong Kong, spread to Europe and then continued in the United States. Bids from the opening bell and throughout the end of the trading day dropped dramatically. For the time, it was the equivalent of a no-bid market. If you were able to get executions on your trades, the fill prices were often $10-20 or more below the quoted prices when the trades were entered.

In those days, personal relationships mattered. For our clients with accounts at one large firm, we were able to get out early in the session by calling management of that brokerage house. The managers walked our trades down to the floor. Calling in trades through traditional channels was fruitless. Everyone was selling.

For the day, the Dow Jones Industrials declined by almost 23%, equivalent to a 4,100 point loss in today’s world.

The market action and overnight events leading up that Friday in 1987 triggered a similarly eerie sense of foreboding that we had on the Friday prior to Black Monday. As the saying goes, “bull markets take the stairs and bear markets take the elevator shaft”.

The triggers for crashes seemingly come out of the blue, but in truth that is not really the case. The stock market had soared leading up to the Crash, in the face of rising interest rates, a slowing economy and turbulent currency markets. Convinced that the risk of holding outsized positions in equities had been nullified by portfolio insurance, fund managers went for maximum return at the point of maximum risk. A heavy price was paid. 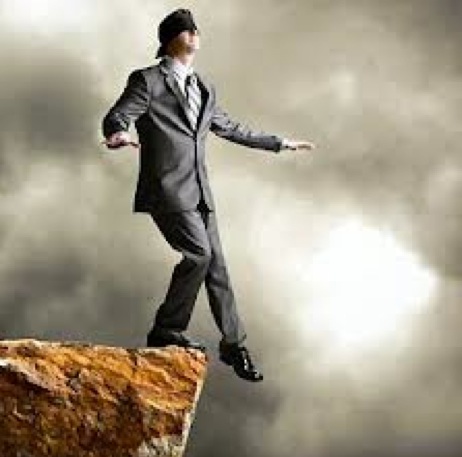 Today The Use Of Leverage Is Rampant

In our day, the “Bernanke Put”, derived from the Fed’s QE and the actions of the Plunge Protection Team, has allowed investors all over the world to over-allocate to stocks. As a consequence, institutions continue to plow money into often bloated valuations. Justifications are made, but the reality is that there is no other place to put such large sums. Yields are negligible to negative on fixed income. Those institutions avoiding stocks pay a price for fund outflows due to underperformance. With the world awash in worthless liquidity and incremental returns tough to find, the use of extreme leverage is rampant. Extreme overallocation and extreme leverage are a toxic combination.

Is The World Being Set Up For Something More Terrifying Than The 1987 Crash?

Whether or not next week will see a continuation of Friday’s decline is impossible to say. However, we can say that the stars are aligning for such an event. For those who say that huge declines are unimaginable, they need to read their history books. By the end of October in 1987, the Hong Kong market had fallen 46%. New Zealand was particularly hard hit, falling 60% from the peak.

We certainly hope to never experience similar events again, but we are fearful that the setup this time is global and the size of the potential destruction could make the 1987 debacle look like a cakewalk. The system would have completely collapsed if the new Fed Chairman, Alan Greenspan, had not ordered the banks to provide liquidity. If there is a meltdown in our future, it will take an enormous amount of liquidity to have any hope of stemming an outright collapse. At a minimum, you will see a no-bid market, similar to what briefly happened on Friday with the Bloomberg outage.

The day when the precious metals, the miners and the oil stocks reach escape velocity from stocks and bonds, in general, is fast approaching, and those allocations need to be completed as soon as possible. ***ALSO RELEASED: Gerald Celente – Who Knows, Maybe The End Is Near? CLICK HERE.