With so many people around the world wondering what to expect in global markets for the back half of September, here is an extremely important look at the big picture… 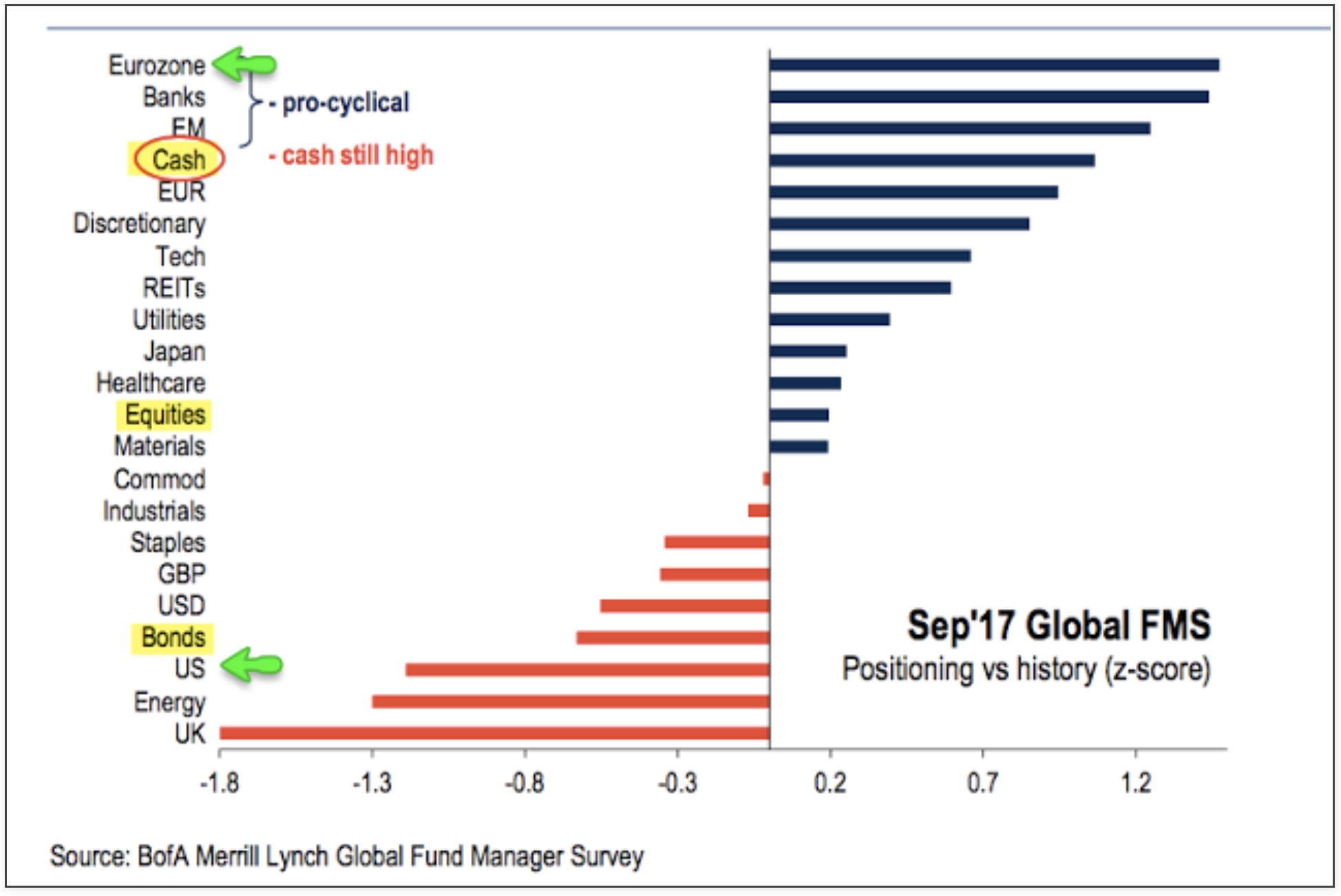 Cash
Cash remains high at 4.8% in September (BAML considers cash levels above 4.5% to be a contrarian long for equities). This is still supportive of further gains in equities. A recap:

Fund managers’ cash levels rose to 5.8% in October 2016, the highest cash level since November 2001.  This set up a contrarian long in equities…

Cash remained above 5% for almost all of 2016, the longest stretch of elevated cash in the survey’s history.

At current levels (4.8%), some of the tailwind behind the rally is gone but cash is still supportive of further gains in equities. A significant further drop in cash in the month(s) ahead, however, would be bearish. 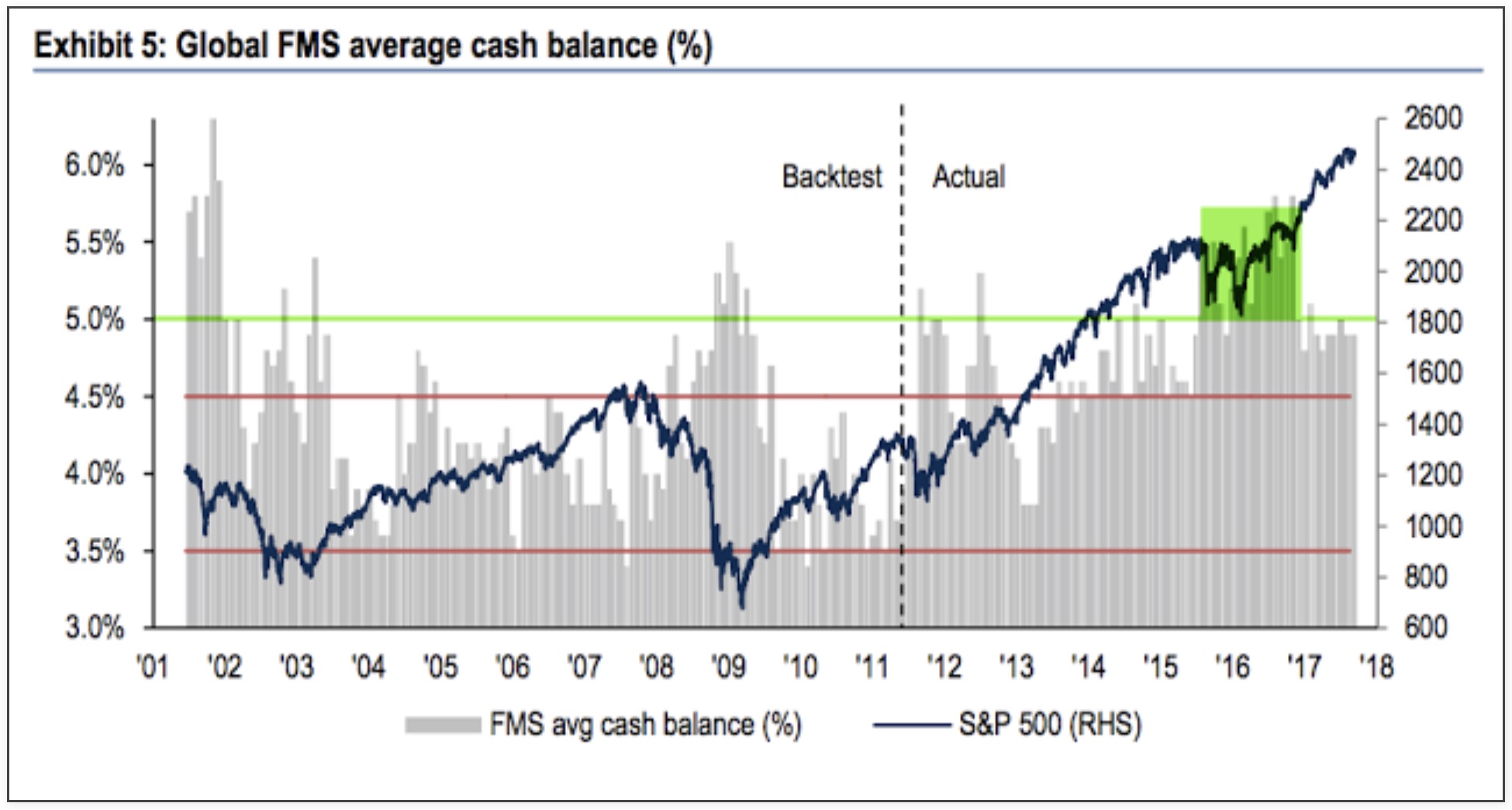 US equities
US equities are strongly out of favor and should outperform. A recap:

Fund managers were consistently and considerably underweight US equities for a year and a half starting in early 2015, during which US equities outperformed.

That changed in December 2016, with fund managers becoming +13% overweight, and they remained overweight through February: bearish sentiment was no longer a tailwind for US equities and US equities underperformed their global peers.

Fund managers have now dramatically dropped their allocation to -28% underweight, the lowest since November 2007 (1.2 standard deviations below its long term mean). This is where US equities typically start to outperform again.

Notably, the S&P has outperformed the Europe’s STOXX600 by 10% the past four months. 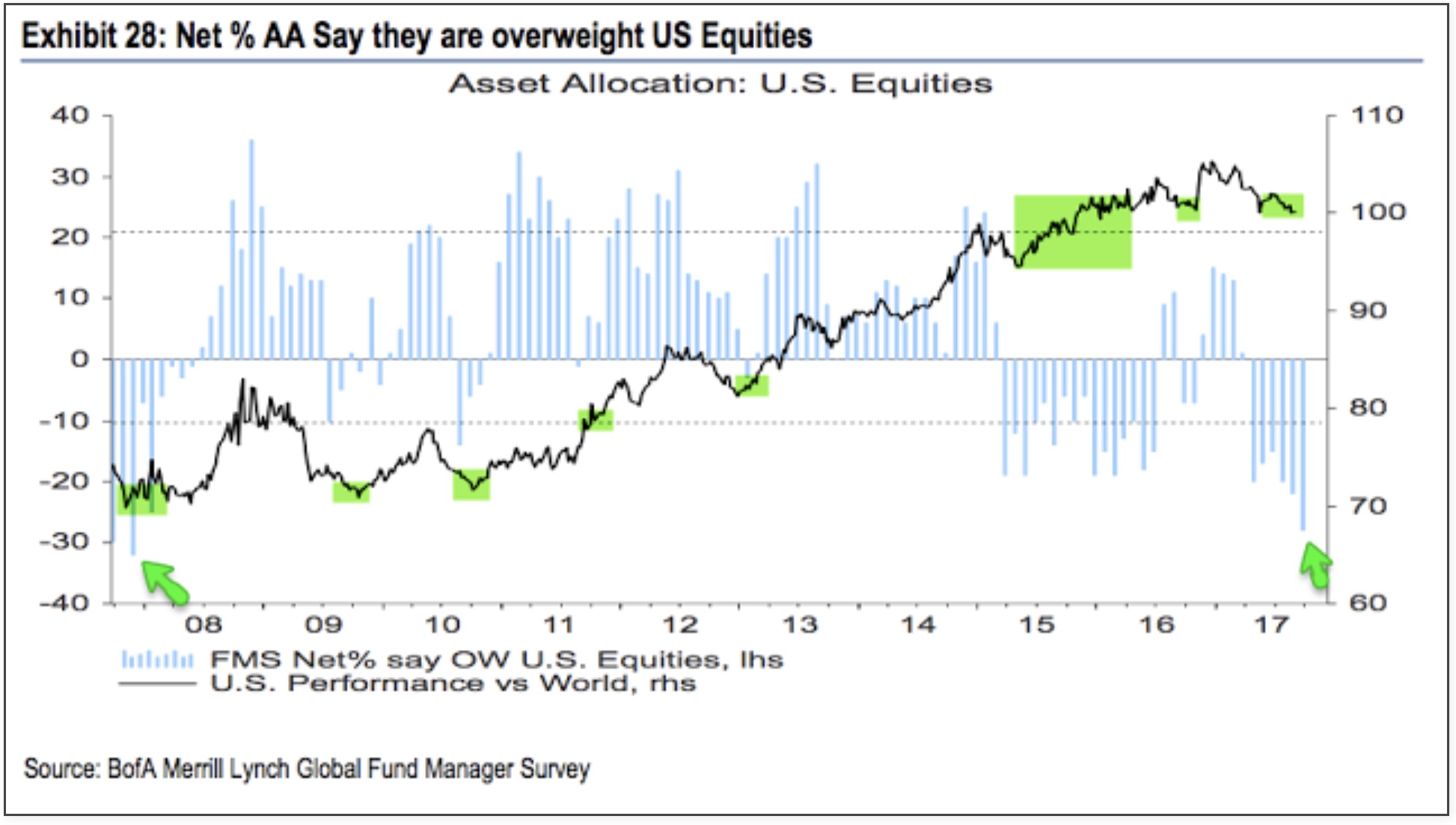 Fund managers’ positioning in US equities versus Europe is the lowest since April 2007 (1.5 standard deviations below its long term mean), after which the region began to outperform. 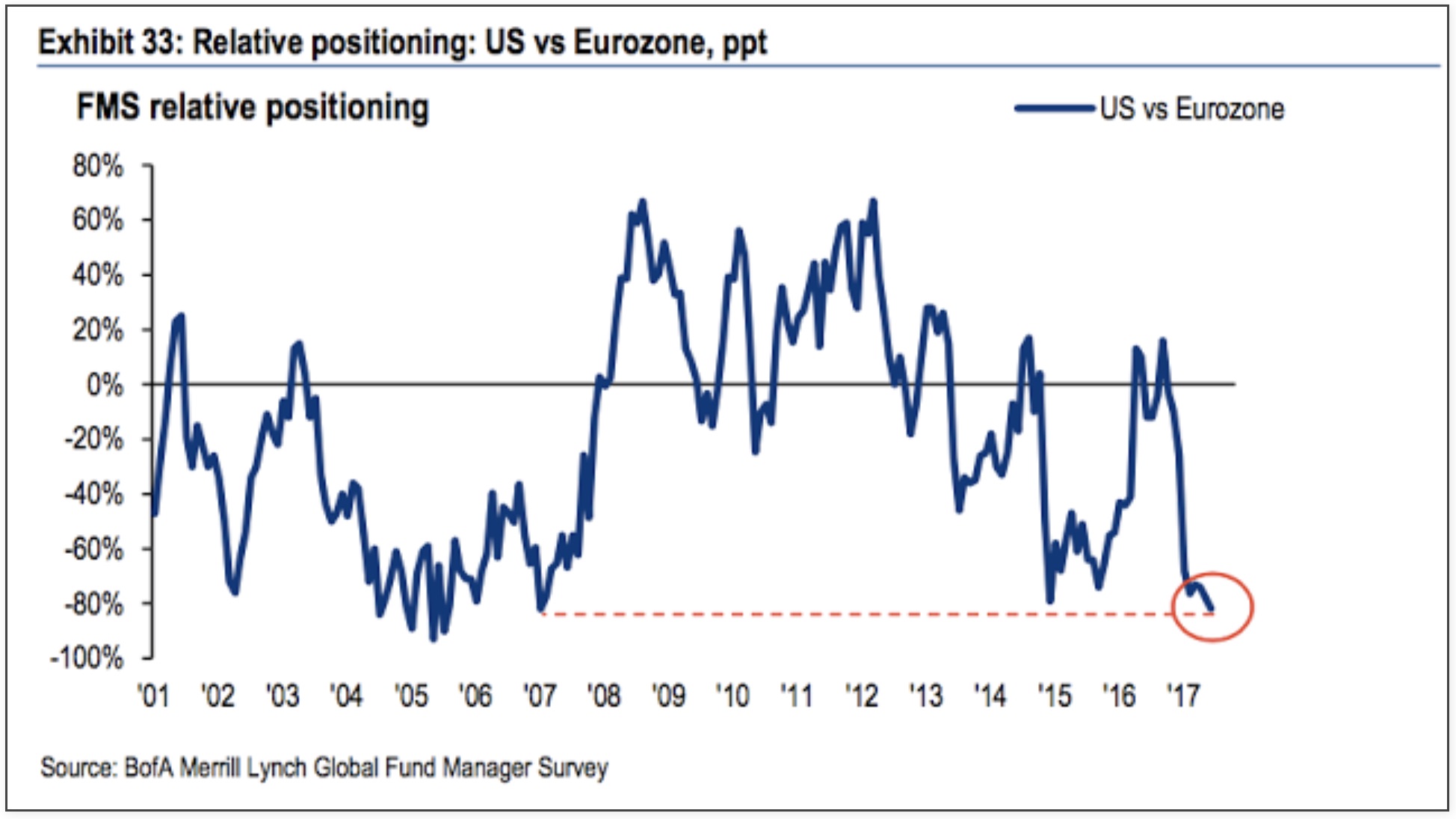 Likewise, fund managers’ positioning in US equities versus emerging markets is the lowest since November 2007 (1.5 standard deviations below its long term mean), after which the region began to outperform. 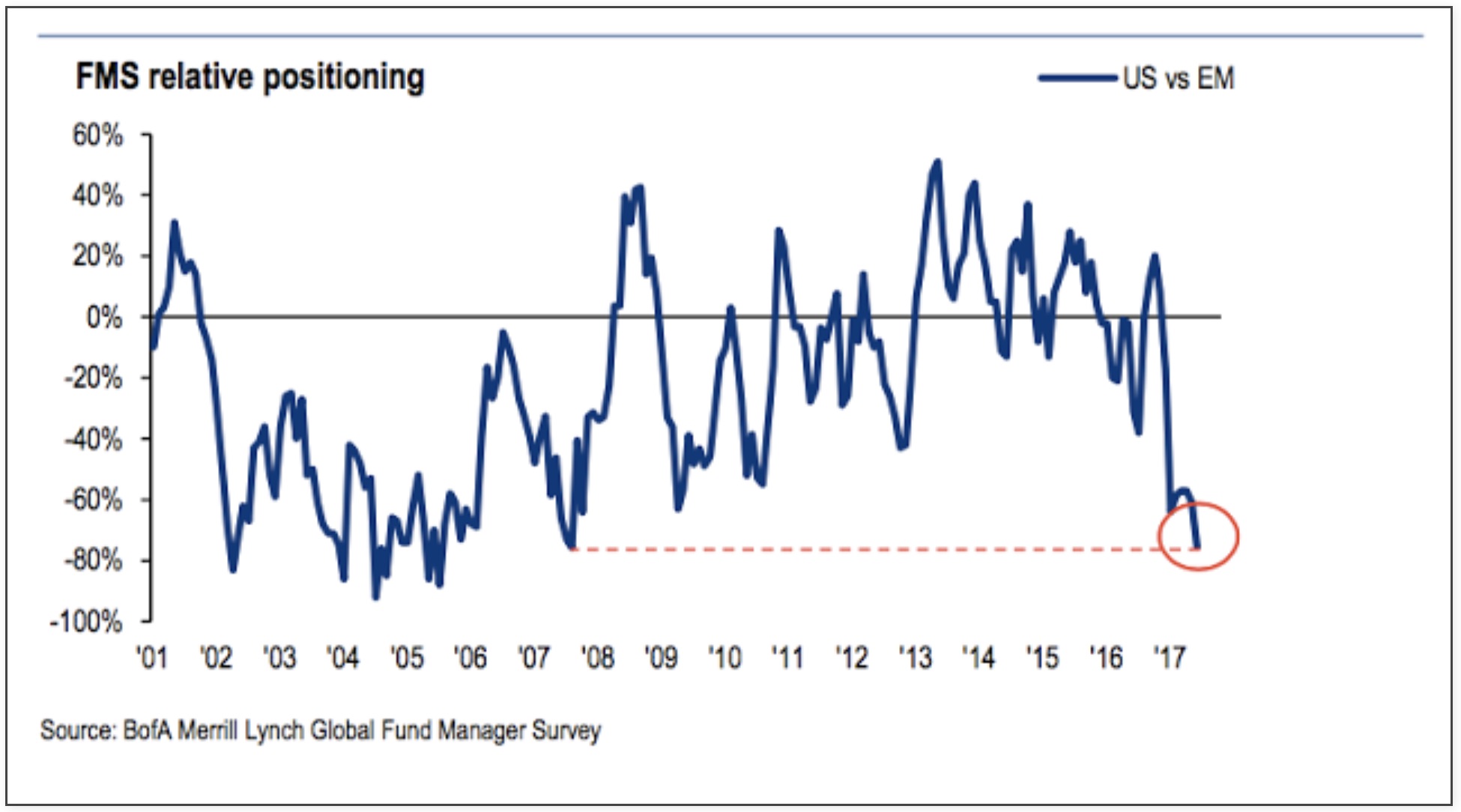 That changed in July 2016, with the region becoming underweighted for the first time in 3 years. The region then began to outperform.

European exposure rose to +54% overweight in September, near a 3-1/2 year high. This is well above neutral (1.5 standard deviations above its long term mean). European equities are at high risk of underperforming. 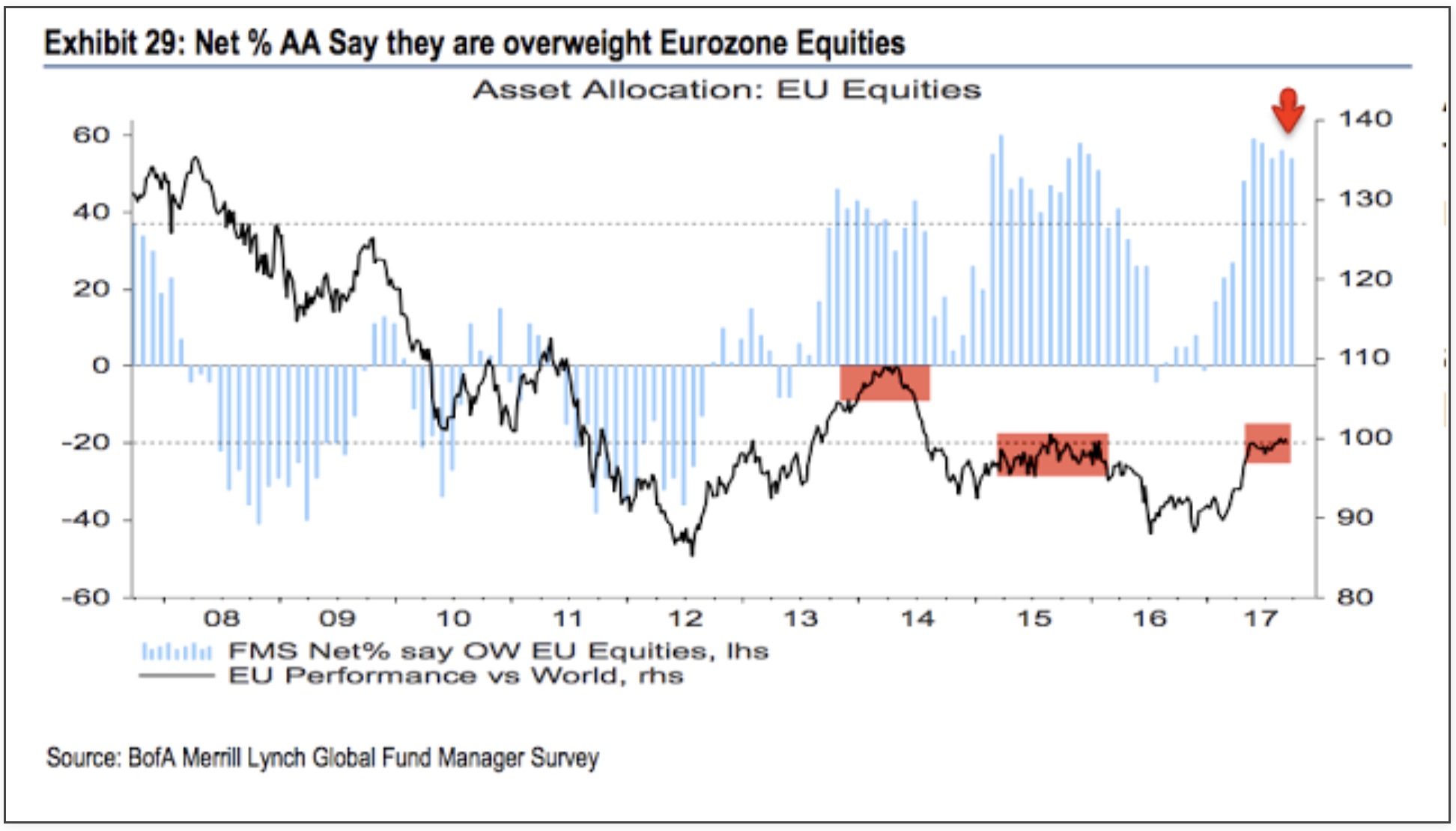 Dollar
The US dollar has gone from overvalued to the most undervalued in nearly 3 years. A recap:

Since 2004, fund managers surveyed by BAML have been very good at determining when the dollar is overvalued (highlighted in green).

In March 2015, they viewed it as overvalued for the first time since 2009; the dollar index fell from 7% in the next two months.

In late 2015, they again viewed the dollar as overvalued and the index lost 7%.

Fund managers had viewed the dollar as overvalued since November 2016; since then, the dollar has lost about 8%. YTD, the dollar is down 12%.

In September, 23% of fund managers view the dollar as undervalued, the most since December 2014. This has been when the dollar has begun to rise (red highlights). 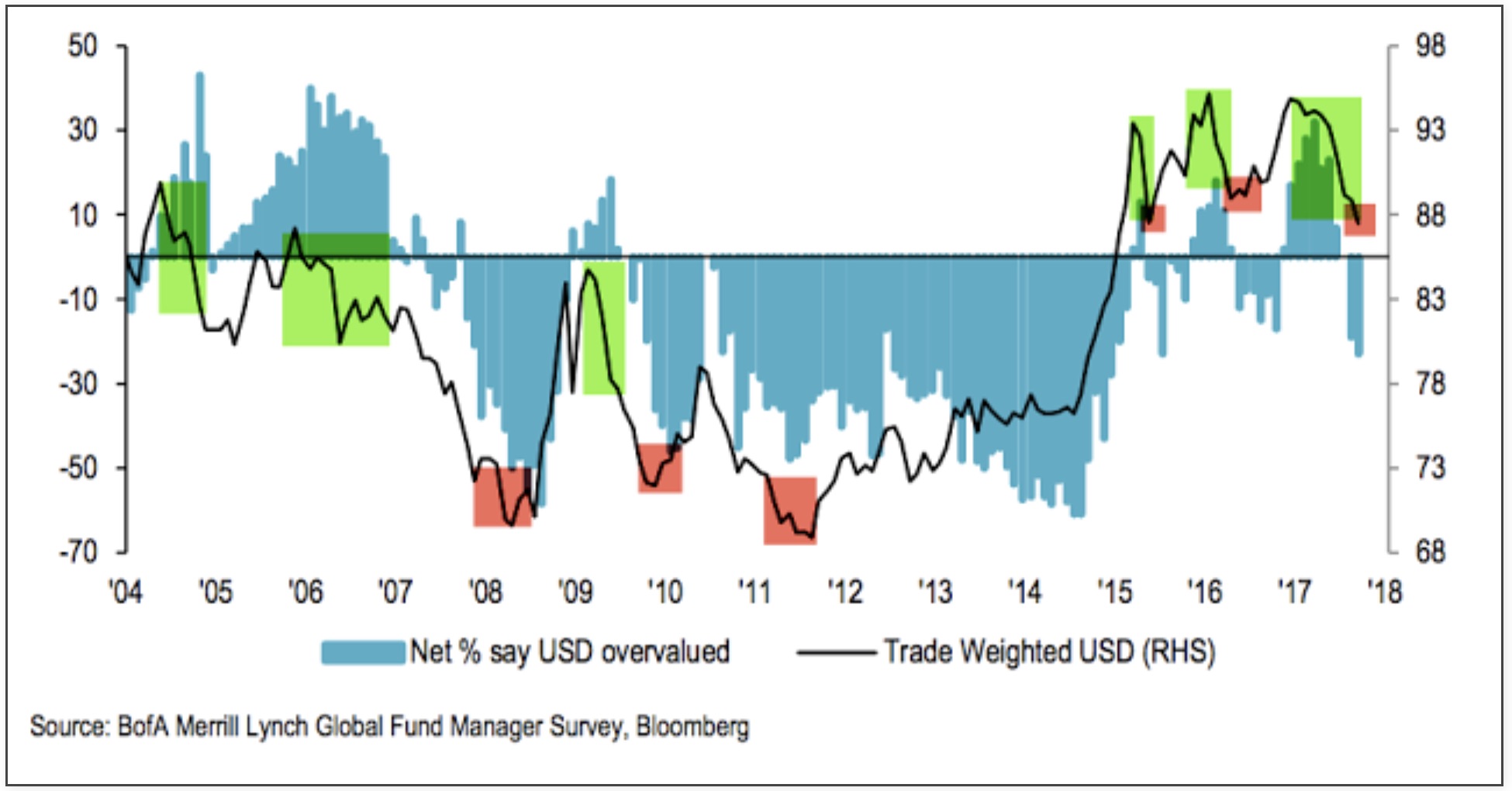 King World News note:  There is a staggering amount of money sloshing around the world trying to find a home, with investors and fund managers desperately attempting to find the next big wave to ride.  As things begin to come unglued in financial markets, the demand for safe havens such as gold and silver will dramatically increase.  As this unfolds, it will create massive gains in both metals.