As markets open for trading across the world after a long 4-day weekend, here is an incredibly important look at what both the bears and the bulls need to be aware of.

King World News note: Below is a tremendous piece that Jason Goepfert at SentimenTrader wrote at the end of last week’s plunge in the Dow that predicted stocks would rally and rally they did. It’s an important piece because it has some key charts that accompany it. Yes, Jason correctly predicted that stocks would rally — but it’s the big picture that really matters.

From Jason Goepfert at SentimenTrader:  The uptick in fear is “irrational”. Options traders are pricing in future movement in the S&P 500 that is more than twice as much as it has been moving lately, and they expect that movement to begin imminently. When we’ve seen that combination over the past five years, stocks rallied strongly in the days and weeks ahead…

“Irrational” Fear
Yesterday, we took a look at times when options traders seemed to be getting nervous even though stocks have been in a solid uptrend.

There is a bit of irrationality in the jump in volatility expectations, at least in relation to how volatile stocks have been. The VIX is pricing in movement for the S&P 500 that is more than double what it has been showing lately. So options traders are not only expecting a huge jump in volatility from what we’ve seen lately, they also expect it to happen imminently.

The chart below shows every time since 2005 when this combination has triggered (it didn’t trigger prior to 2012). The arrows highlight times when the VIX was more than double the S&P’s recent historical volatility and when the VIX Term Structure was greater than 1.0. 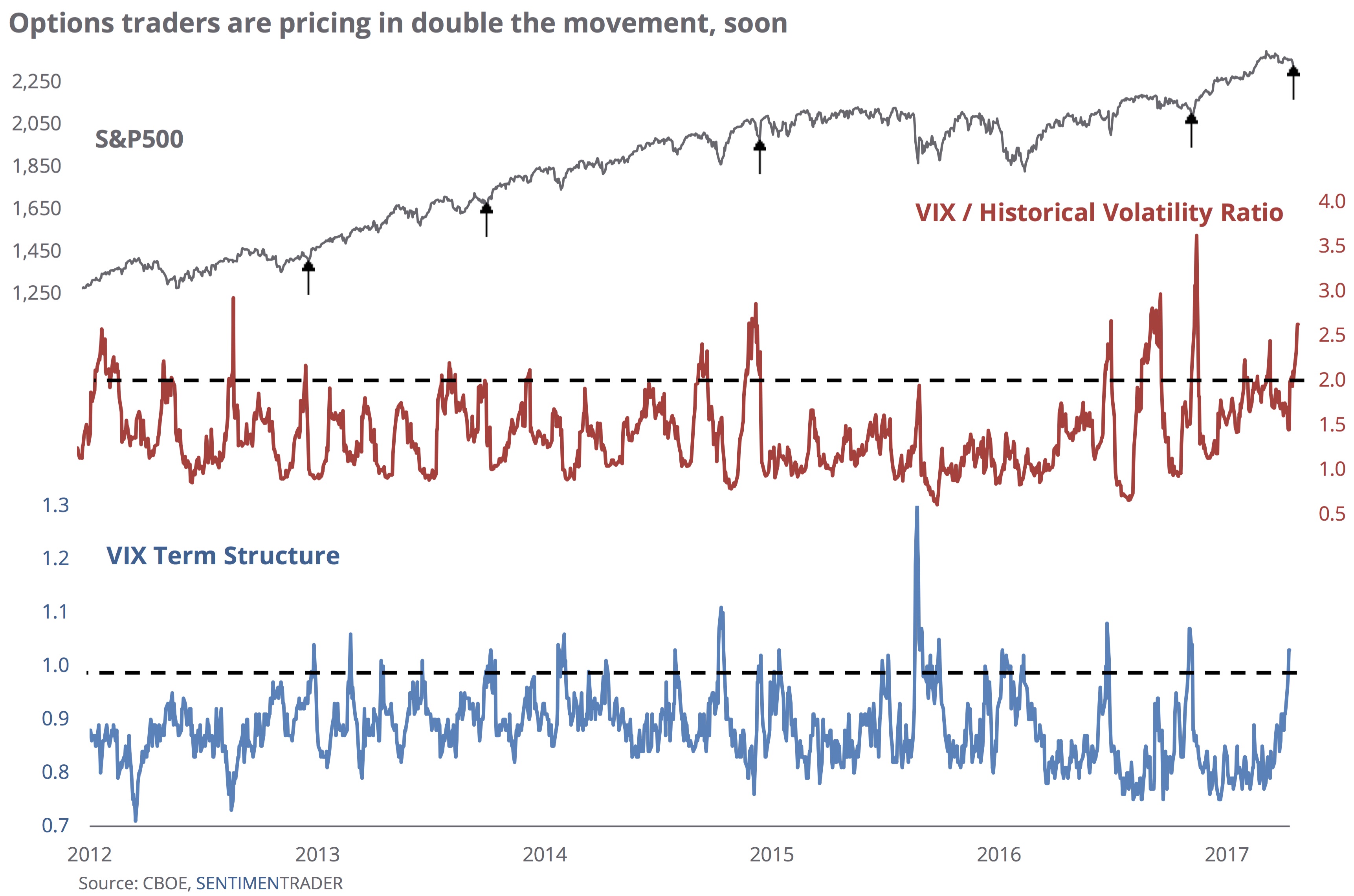 Obviously, the trend since 2012 has been super, so positive returns are expected. Even so, after these signals triggered, the S&P returned an average of +3.7% over the next week, with all of them positive. Over the next month, the S&P didn’t suffer any loss greater than -1.2% at its worst point after any of them, and it gained more than +6% at its best point after all of them.

Emotional Selling In The Futures
Thursday’s trading showed slight evidence of exhaustive selling. The S&P 500 gapped down at the open, closed lower than that open and at a nearly two-month low. All while still trading well above its 200-day average, which is unusual.

All similar occurrences in the futures are shown below. Note the one-month returns, during which the S&P rallied 15 out of 16 times and enjoyed a more than 5-to-1 reward-to-risk ratio. Emotional selloffs during strong uptrends have not often turned into lasting pullbacks.

More signs of exhaustion. Both the put/call ratio and Arms Index jumped to extreme levels on Thursday. 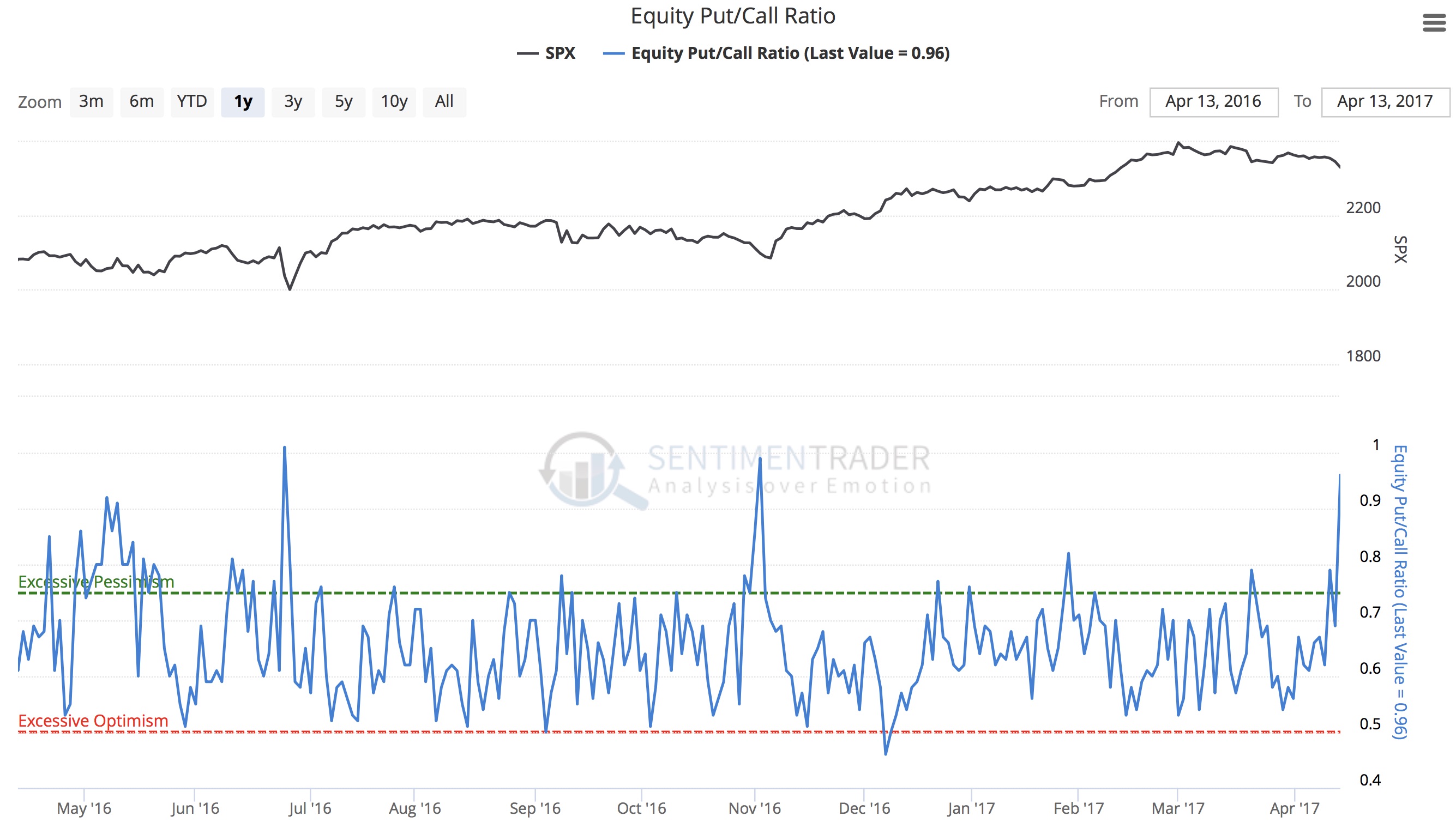 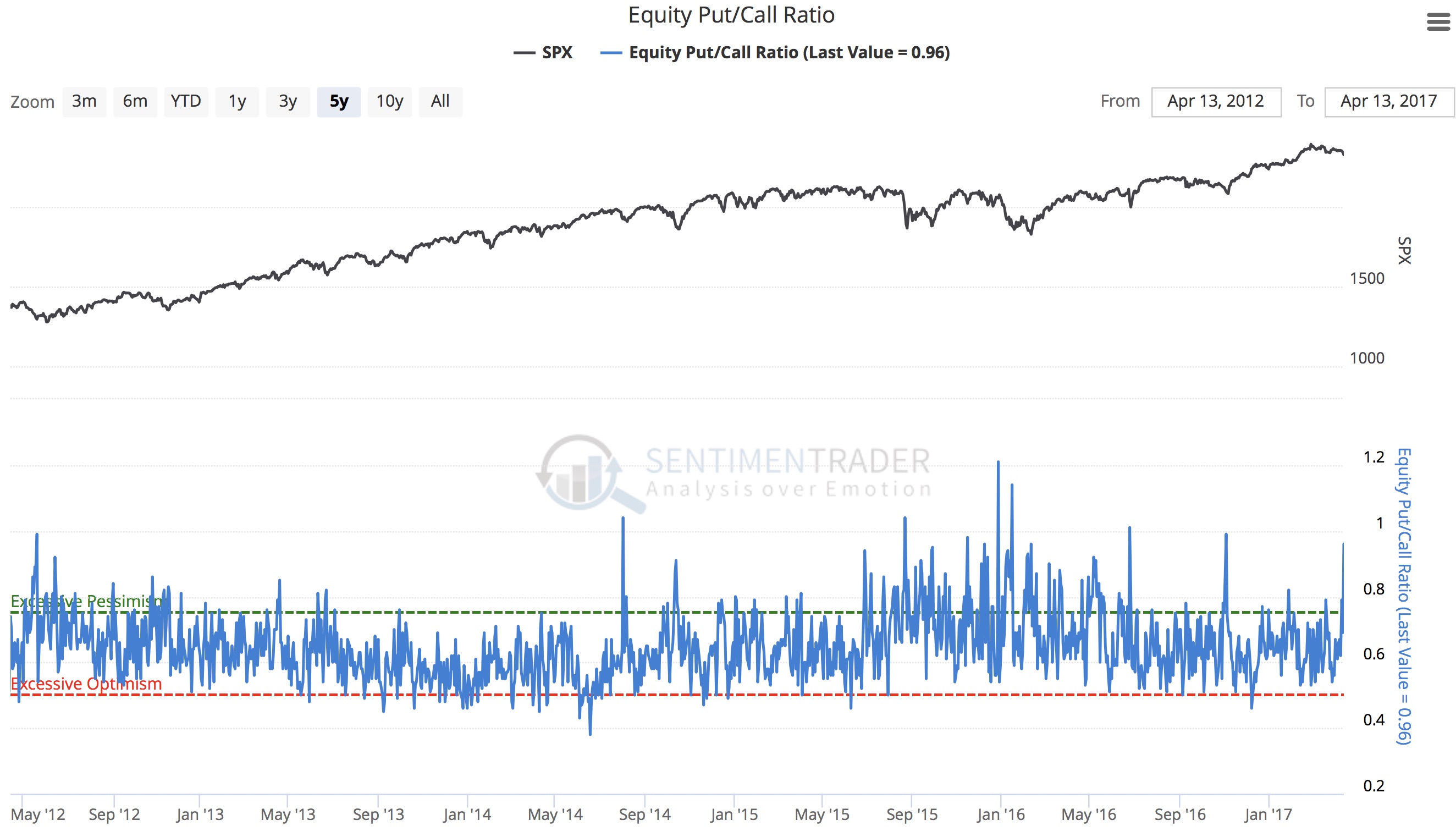 When the p/c ratio was above 0.9 and Arms above 2.0 while the S&P was above its 200-day average, it rallied over the next week all 6 times, averaging 1.6%. When it was below its 200-day, it still rallied 56% of the time but suffered some large losses. Context matters.

King World News note:  The bottom line is that the bears need to be extremely careful with this market. As Jason stated, here is the key:

King World News note:  Let’s see how the market trades the rest of this week and into next. It will provide the answer as to the real trend for both the bulls and the bears.

***ALSO JUST RELEASED: With Respect To Gold, Silver And The Dollar… CLICK HERE.

Propaganda, Depression And The Greatest Illusionist Of All Time