“No subject is so much discussed today – or so little understood – as inflation.” — Henry Hazlitt

By Ronald-Peter Stoeferle, Incrementum AG Liechtenstein
June 8 (King World News) – As the following chart illustrates quite clearly, both stocks and bonds tend to lose ground in an environment of accelerating price inflation. Even though stocks are often considered to be suitable inflation hedges since they represent claims to real assets, historical data on this point are rather more ambiguous. Numerous studies actually show that stock prices and price inflation are negatively correlated. In other words, a surge in price inflation will normally have a negative effect on stock prices. Of course the effect varies greatly between market sectors. That is a major reason why gold stocks and the stocks of other commodity producers have attractive characteristics in the context of prudent portfolio diversification, as they are clearly positively correlated with rising inflation rates. 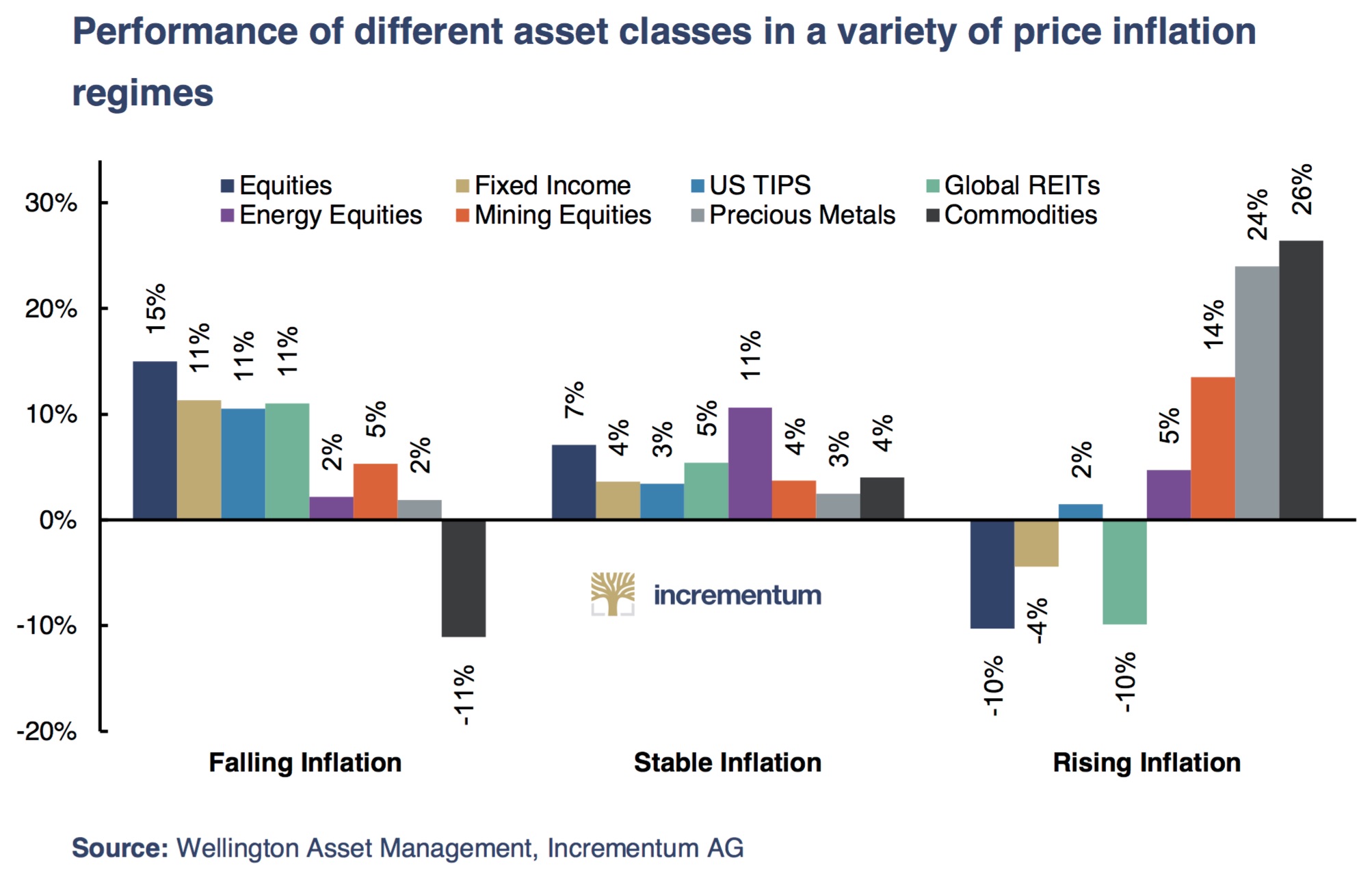 In an environment of merely “elevated” 1970s style price inflation rates, the value of future earnings streams tends to be heavily discounted by the stock market. Many sectors will experience a sharp compression of multiples. Broad stock market indexes in developed markets are liable to decline, as most growth stocks will come under strong pressure. Lower order industries close to the consumer will suffer as well, and so will domestically focused banks, especially if real interest rates are persistently negative. Stocks of capital-intensive companies in higher order goods industries such as miners or various “smokestack” industries will tend to hold up better or even thrive…

“In times of crisis people are generally blind to everything outside their immediate necessities.” — Albert Einstein

A Crack-Up Boom
These trends become even more pronounced if a country’s currency breaks down in a crack-up boom, and a hyperinflation episode begins. As an aside, it is possible to survive and even thrive in hyperinflation conditions, but it is not easy and one has to be constantly on one’s toes. Wealth preservation becomes a full-time job, and many traps await the unwary. Moreover, governments will often do their utmost to prevent people from trying to preserve their wealth, as the associated activities are usually blamed for exacerbating the situation (governments presiding over hyperinflation never blame themselves or their policies).

IBC General, Caracas, Venezuela – an example of a stock market in an emerging economy under hyperinflation conditions 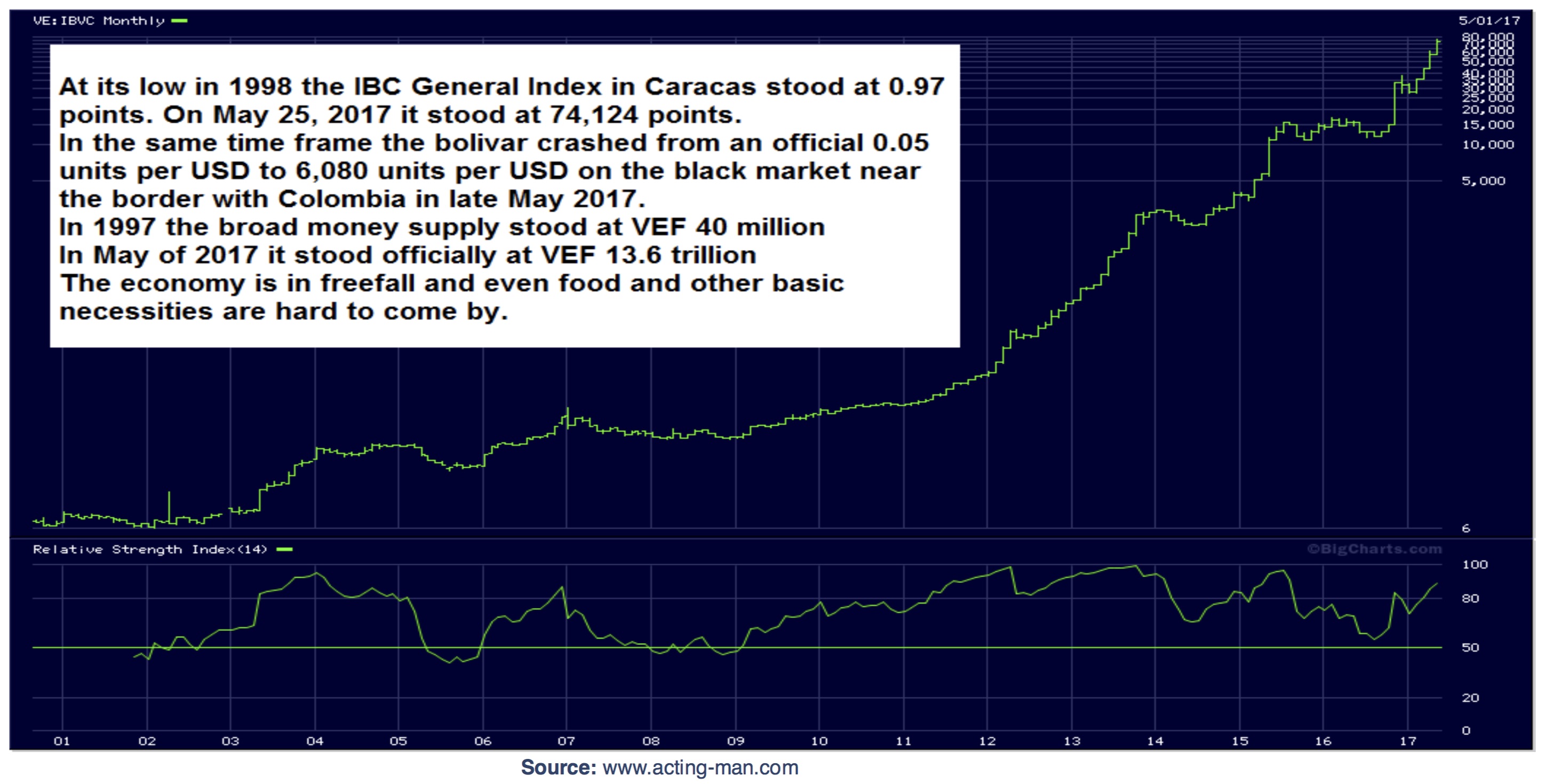 These magnified boom-bust cycles on steroids are also very dangerous because the trend is bound to eventually rapidly reverse after which a “stabilization crisis” will commence (as a rule this happens overnight, once the official medium of exchange is completely repudiated). What was valuable and sought after can become an instant liability, while assets and business sectors that were previously shunned will begin to recover and thrive again. The average citizen is probably best served by holding precious metals and foreign investments if it becomes necessary to deal with such circumstances.

Most Important Catalyst For The Gold Price
In our opinion a potential recession in the US, which would invariably lead to a U-turn in monetary policy, represents the potentially most important catalyst for the future trend in the gold price.

We are well aware that as Austrian School representatives, we may be inclined to be a tad too hasty in suspecting an economic downturn to approach in fairly short order. Nevertheless, we believe that generally, the potential for such a scenario to eventuate is unduly underestimated at present. One almost gets the impression that the possibility of a recession is completely disregarded and treated as though it were a black swan. We believe there are already numerous indications which suggest that the current expansion is going to end in the foreseeable future. A recession scenario is therefore actually quite probable in our view.

If our expectation is confirmed, a monetary policy response in the form of rapid rate cuts and a renewed round of quantitative easing should be expected. In such a scenario gold should post significant price gains.

***ALSO JUST RELEASED: ALERT: This Is The Real Reason Why There Was A Panic To Push The Price Of Gold Lower Today CLICK HERE.